So it’s all done, with some bumps along the way.

On November 6th, just after discontinuing the pill and while on vacation in Ojai, I started taking the “stim meds” (forum-speak for stimulation medications) which are meant to stimulate my ovaries into making a shitload of follicles and, thereby, a shitload of eggs. The stim meds consisted of 350 mg of Gonal-f, 2 vials of Menopur and 2cc’s of micro-dose Lupron. I took one Lupron shot in the morning, and one Gonal-f shot, one Menopur shot and another Lupron shot in the evening. There is a lot of complicated measuring and mixing and I feel qualified to be a biologist at this point. Note: these are all hormones that make a person (at least this person) totally crazy. So these crazy-making hormones in incredibly high doses were now added on top of my lack of anti-crazy pills. I would also like to mention that having gone off of the anti-depressant Lexapro so quickly caused me to feel like my brain was being teased with a cattle-prod whenever I moved. This lasted for about two weeks.

So, to recap, cattle-prod to the head + mass doses of hormones shot into my belly = not very reliable at work (which requires a lot of multi-tasking), crying at EVERYTHING including Jennifer Gray’s rumba on Dancing With The Stars and my husband’s thoughtful re-heating of my decaf mocha, plus also wanting to kill everyone who called me at work and didn’t state immediately and succinctly the purpose of their call.

My first few ultrasounds showed high levels of estrogen but slow-growing follicles–9 in one side and 10 in the other–so they upped my Gonal-f to 450.

Ok, so I may have been overstimulated just a bit. By the end of the 2nd week I could not button my pants and walked around literally buttonless and zipperless. My belly was so big that my pants stayed up just the same.

By my last check-up, I had extremely high estrogen levels and 30 follicles. The day of the egg retrieval, last Friday, they harvested 27 eggs, 19 of which were mature enough to use. Because I’m opposed to freezing embryos when future “discarding” is a possibility, we had the doctor only fertilize 4 eggs and freeze the rest.

Following the egg retrieval is when the fun started. I quickly e x p a n d e d in the belly-area and looked like I was already 6 months pregnant. This was because of all the follicles inside my enlarged ovaries, which are now, 3 days later, the size of 2 grapefruits. I’m having a hard time breathing, eating, sleeping, moving. I was worried they might not go through with the transfer today.

This was a pic of me I took last night just so you know I’m not exaggerating: 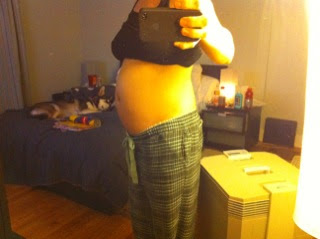 And FYI I normally do NOT look like that.

But when they examined me this morning, they said I have a little fluid in there (from “sweating ovaries,” ew–but a great band name) but mostly it’s just a whole lotta ovary. Because I haven’t been throwing up and have been able to continue breathing they decided it was a GO for the transfer. Four lovely little embryos graded 8BC, 6AB, 6BC and 6BC. They have the most hopes for the 6AB but said all of them look awesome. Here, see for yourself:

Aren’t they so pretty? So it’s back to bed for me (where I’ve been since Friday anyway, very hard to stand up straight…and walk) for the next three days while the little guys (and/or gals) hang on for dear life. Wish them luck.

Blood test on 12/1. I promised I wouldn’t buy a home pregnancy test 🙂